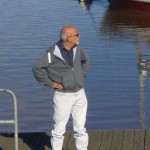 The Exeter canal was begun in 1564 – 200 years before the main era of canal building in England. Here it was last Saturday at the point where it begins with the river Exe to the right and the Turf Hotel between the two waterways. It was a gloriously sunny day and perhaps we can say that the last of the summer wine was drunk that day at the Turf Hotel. It is drizzly today in Devon.