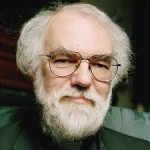 While specialist theologians regard Archbishop Rowan Williams as a creative and powerful thinker, others often find him complex and difficult to follow.  I shall never forget sitting in the sunshine on a summer afternoon in the beautiful Cathedral Close in Exeter in 2009, when the diocese was celebrating the 1100th anniversary of its foundation, listening to Rowan being interviewed by David Winter.  The Archbishop simply told the story of his conversion to Christ and subsequent spiritual journey – everyone in Exeter on that sunny afternoon could understand everything he said – it was simple and moving.
During his enthronement sermon on 27th February 2003 he recalled how, twelve years earlier, he had visited an Orthodox monastery and was taken to see one of the smaller and older chapels.  “It was a place intensely full of the memory and reality of prayer. The monk showing me around pulled the curtain from in front of the sanctuary, and inside was a plain altar and one simple picture of Jesus, darkened and rather undistinguished. But for some reason at that moment it was as if the veil of the temple was torn in two: I saw as I had never seen the simple fact of Jesus at the heart of all our words and worship, behind the curtain of our anxieties and our theories, our struggles and our suspicion. Simply there; nothing anyone can do about it, there he is as he has promised to be till the world’s end. Nothing of value happens in the Church that does not start from seeing him simply there in our midst, suffering and transforming our human disaster.”
And in his book Christ on Trial (2003) Rowan Williams explains that the gospel is not an abstract mantra, but an invitation “to be drawn into cross and resurrection and to find there … at once a decisive No and an everlasting Yes to ourselves”.
The theme of this website is pilgrimage and, in  a series of occasional blogs, I want to try to demonstrate that Rowan Williams can actually be understood and that he has valuable and engaging insights for believers across the church spectrum and for unbelieving searchers after reality as well.
ChristianityRowan Williams