In 1956 John Stott ﬂew to join Billy Graham in New York, from where they travelled together to Princeton for a conference on evangelism. They stayed at the Princeton Inn where John had a room next to Billy’s. Their windows looked out over the closely cropped lawns of a golf course, past a little lake to the impressive tower of the graduate building beyond. For two nights John gained an insight into Billy’s pressurised programme. Telegrams kept arriving all day. As John turned his light out, Billy was still talking on the phone, and he woke to hear him answering a long-distance call.

They took the train south for a twenty-four-hour journey to North Carolina, to spend Christmas with the Graham family. Billy drove John along the steep and winding road to their home in Montreat, a village on the side of a mountain. Billy and Ruth lived in a log-cabin style house, surrounded by woods, with a superb view across the valley to the mountains beyond.

John was the only guest, sharing the home with the Grahams, their dogs and three mountain sheep with black faces and legs. The youngest child, Franklin, was armed with daggers. A big Christmas tree lit up the sitting room, with presents piled underneath it.

‘The adults must hang up stockings as well as the children,’ Billy instructed.

On Christmas Eve they nailed seven stockings, each clearly labelled, in a row along the beam over the ﬁreplace. When John undid his stocking on Christmas morning he found sea-sick pills, spare socks, and a Longines Swiss watch inscribed ‘John Stott from Billy Graham’, which he went on to wear for twenty-ﬁve years. But that wasn’t all. There was a strange little plastic container.

Then ‘DORANT’ – did this mean ‘gift of God’? The Grahams had to explain to him what it was. Toiletries for men had barely begun to cross the Atlantic in the 1950s!

Billy took Christmas gifts round to the people in the neighbourhood, and each night led the family in a Bible reading and prayers. During John’s stay, Cliff Barrows and Grady Wilson came to record the ‘Hour of Decision’ radio programme. Then they played golf with Billy while John admired yellow-bellied sap-suckers on the golf course.

You can read the whole of my story of John Stott’s life in ‘Inside Story: The Life of John Stott’ published in Britain and America and available on Amazon. 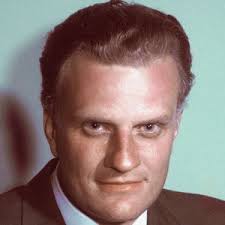