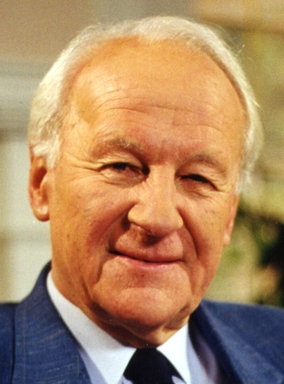 In 1952, John led a CICCU mission at the University of Cambridge. Crowds at this, the ﬁrst of many university missions he was to lead, were so great that stewards brought extra chairs into the side-aisles of Great St Mary’s, the University church. Many years later, Owen Chadwick, the distinguished church historian, told John that ‘the ﬁnest Christian preaching I ever heard in my life was the ﬁrst sermon you gave in Great St Mary’s to open the Cambridge mission’. On the ﬁnal evening they had to turn latecomers away.

Three years later, John was back in Cambridge, not to lead a mission this time, but as senior assistant missioner to Billy Graham, who had accepted the CICCU’s invitation, with John’s warm encouragement.

When news leaked out that Billy was to lead this mission, a ﬁerce debate began about religious fundamentalism. It began in the correspondence columns of The Times with a letter from Canon Luce, Headmaster of Durham School. Luce argued that the recent increase in fundamentalism among university students should cause concern to those who worked in religious education. ‘No branch of education,’ he argued, ‘can make terms with an outlook which ignores the conclusions of modern scholarship in that particular department of knowledge . . . Is it not time that our religious leaders made it plain that while they respect, or even admire, Dr. Graham’s sincerity and personal power, they cannot regard fundamentalism as likely to issue in anything but disillusionment and disaster for educated men and women in this twentieth-century world?’

A ﬂurry of letters followed. Mervyn Stockwood, Vicar of  Great St Mary’s, pointed  out that his permission for Dr Graham to use his church didn’t imply any endorsement of his views. Michael Ramsey, then Bishop of Durham and later to become Archbishop of Canterbury, assured Times readers that many people would be grateful to Canon Luce for highlighting the problems created by the revival of fundamentalist evangelism. He recalled that a long line of great evangelists, including William Temple, had emphasised the need for decision and conversion hand in hand with an insistence upon the duty of thought and the rationality of the Christian revelation.

Bishop Barry, of Southwell, wrote on the other hand that, ‘if I were vicar of St Mary’s, Cambridge, I should have no hesitation in lending the church for Dr. Graham’s mission’.

John waited for ten days and then wrote this letter to The Times:

Sir, It is surprising that your correspondents on this subject have not paused to deﬁne the term ‘fundamentalism’. They have assumed that your readers understood the term, that they understood it in the same sense, and that it accurately describes Dr. Graham. Actually, the term clearly has different meanings, and Dr. Graham has publicly denied on more than one occasion that he is a fundamentalist.

The word had a noble origin . . . [but more recently] has become associated with certain extremes and extravagances, so that now ‘fundamentalism’ is almost a synonym for obscurantism, and it is generally used as a term of opprobrium. It appears to describe the bigoted rejection of all biblical criticism, a mechanical view of inspiration and an excessively literalist interpretation of Scripture. It is doubtless in this sense that your correspondents have employed the term, and in this sense that Dr. Billy Graham and others associated with him have repudiated it.

Clearly a distinction must be drawn between fundamentalism and the traditional, conservative view of Scripture. It is neither true nor fair to dub every conservative evangelical a ‘fundamentalist’. The conservative evangelical desires to lay a truly biblical emphasis on the necessity of divine revelation, to ascribe to the Scriptures no meaner an authority than did our Lord and his apostles, and to accept the biblical doctrine of Scripture as they accept the biblical doctrine of God and Christ and the Church. The real point at issue in this controversy, revealed by an episcopal disagreement in your columns, seems to be the place of the mind in the perception of divine truth.

All thoughtful Christians would agree with the Bishop of Durham, whose letter you published on August 20, that God’s revelation is essentially reasonable, but would have to add that it is often in conﬂict with the unenlightened reason of sinful men. The Bible is itself aware of this conﬂict . . .

There is then in conversion not what the Bishop of Durham calls ‘the stiﬂing of the mind’ but the humble (and intelligent) submission of the mind to a  divine revelation. The proud human intellect still needs to be abased – in England as in Corinth – and the only way to enter the Kingdom of God is still to become like a little child.

The Times debate ended with a leader which lent some support to Billy’s coming mission by suggesting that the contemporary trend of biblical scholarship was opposed to the nineteenth-century theological liberalism espoused by some of the letter writers.

Billy Graham himself, far from accepting the label, told his wife how he suffered at the hands of fundamentalists who criticised his policies and sometimes his message. He wrote to Ruth: ‘Some of the things they say are pure fabrications . . . If this extreme type of fundamentalism was of God, it would have brought revival long ago. Instead, it has brought dissension, division, strife, and has produced dead and lifeless churches.’

Billy found the prospect of conducting a full-scale university mission at Cambridge increasingly daunting. ‘I am deeply concerned and in much thought about the mission,’ he told John. ‘I have never felt more inadequate and totally unprepared. As I think over the possibility for messages, I realise how shallow and weak my presentations are. I shall be relying heavily on you and Maurice [Wood].’

When Billy arrived in Cambridge, John arranged for him to talk privately with C. S. Lewis, then a Fellow of Magdalene College. The three of them met in Lewis’s rooms at Magdalene and spent an hour or so together.

‘I was afraid I would be intimidated by Lewis,’ Billy later admitted, ‘but I was relieved to ﬁnd that he immediately put me at ease. I found him to be not only intelligent and witty but also gentle and gracious. He seemed genuinely interested in our meetings.’

‘You know,’ Lewis said to Billy as they parted, ‘you have many critics, but I have never met one of your critics who knows you personally.’

You can read the whole story of John Stott’s life in ‘Inside Story: The Life of John Stott’ by Roger Steer, published by IVP and now available as an e-book.