When Cathering of Aragon stayed in Exeter 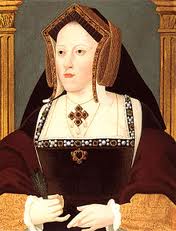 My wife Sheila (not shown in photo) has a meeting this morning at the Old Deanery in Exeter. I have reminded her that when the 16 year old Catherine of Aragon (shown in picture) was enroute from Spain to marry Arthur, the eldest son of Henry VII in 1501, she stayed at the Exeter Deanery, close to St Mary Major (since demolished). The weather was very windy and the vane on the top of the church “…did so whistle that the princess could not sleep” – a workman was ordered to climb the tower and pull it down. Pretty blowy again today in Devon.