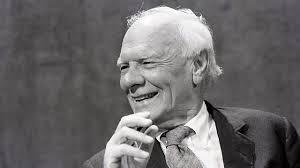 What is happiness and how can we achieve it? Millions of words have been written and spoken on the subject over the centuries. Speaking on Woman’s Hour way back on 5 October 1965, writer and broadcaster Malcolm Muggeridge (1903-1990) was characteristically outspoken: ‘The pursuit of happiness, included along with life and liberty in the American Declaration of Independence as an inalienable right, is without doubt the most fatuous which could possibly be undertaken … To pursue happiness, individually or collectively, as a conscious aim is the surest way to miss it altogether.’ But his dismissal of the idea of pursuing happiness as a conscious objective did not deter Muggeridge from attempting to describe where happiness may be found.

‘Where, then, does happiness lie?’ he asked. ‘In forgetfulness, not indulgence, of the self. In escape from sensual appetites, not in their satisfaction … At its highest level such happiness is the ecstasy which mystics have inadequately described. At more humdrum levels it is human love; the delights and beauties of our dear earth, its colours and shapes and sounds; the enchantment of understanding and laughing, and all other exercise of such faculties as we possess: the marvel of the meaning of everything, fitfully glimpsed, inadequately expounded, but ever-present …

‘Existing, intangible, in every true response to life, and absent in every false one; propounded through the centuries in every noteworthy word and thought and deed; expressed in art and literature and music; in vast cathedrals and tiny melodies; in everything that is harmonious, and in the unending heroism of imperfect men reaching after perfection.

‘When Pastor Bonhoeffer was taken off by his Nazi guards to be executed, as I have read, his face was shining with happiness, to the point that even those poor clowns noted it. In that place of darkest evil he was the happiest of men – he the executed. “For you it is an end,” he told his executioners, “but for me a beginning.” I find this an image of supreme happiness.’

If you do find happiness in 2022, as I hope you will, you would do well to follow the advice of James in his epistle: ‘Is anyone of you in trouble? You should pray. Is anyone happy? Sing songs of praise.’ (James 5:13, NIV)