What happened at Old Swan Stairs in 1802, Part 7 of the Mary Jones story 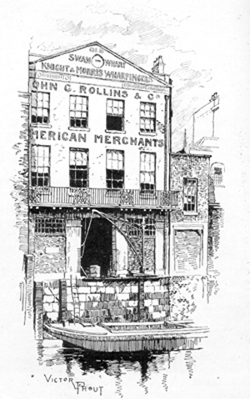 Here, then, is the seventh instalment of the story of how Mary Jones and Thomas Charles triggered a mission to the world.

Early in the morning of Tuesday 7 December 1802, on the north bank of the Thames between Southwark Bridge and London Bridge, Thomas Charles and Joseph Tarn walked together along Upper Thames Street. They turned into Swan Lane where one of thirteen houses was an eighteenth century building comprising offices and a warehouse, close by Old Swan Stairs an historic river-landing place. Here, Joseph Hardcastle had recently acquired a counting house with which he was particularly pleased.  He believed that one way to put into practice his zeal for the Lord’s work was to place the room at the disposal of both the RTS and the London Missionary Society. The building had thick walls and beams of stout oak.

Charles and Tarn entered through the north door, on the farthest side from the river, between Corinthian pillars with stone rosettes on the top. They climbed a winding staircase and came to a door with an oval window. Inside, the counting house was large, nearly square and rather elegant with an ornamental cornice around the top of the walls.  Two windows in the north wall overlooked Swan Lane and a third faced west. On the south wall, three windows with a little iron balcony looked out on to the river. Already, early though it was, boats and barges were making their way slowly up and downstream along the Thames. Candles lit the room.

Those present for the RTS committee meeting voted the Rev Matthew Wilks to take the chair. Joseph Hughes, a portly 33-year-old Baptist minister from Battersea and the committee’s secretary, sat at his side. Most of the fifteen members of the committee were London businessmen but the Rev Karl Steinkopf was a German who had left Basel the previous year to become pastor of the German speaking Savoy parish in London. He would come to play a major part in Bible Society history.

After the committee had confirmed the minutes of the previous meeting and dealt with two items of regular business, Joseph Tarn introduced the subject of a regular supply of Bibles for Wales. The chairman then invited Thomas Charles to enlarge on this by putting his case for establishing a society for the supply of Welsh Bibles. The “country member” of the committee from Bala was rather below ordinary height and had, according to a contemporary, “a singularly sweet and winning countenance”. As he spoke, the committee members noticed that his left thumb was missing.

Charles described the growth of spiritual life in north Wales. He told of his experiences in distributing the 700 copies of the 1799 SPCK edition of the Welsh Bible, and in allotting the grants of Testaments by the Sunday School Society. He spoke of the endless appeals for Bibles which were pouring in from all over Wales and the difficulties which the scarcity of Scriptures was causing him in his work. The copies which were available were too expensive for most ordinary people.

“I beg you to consider establishing a Society similar to the RTS to supply cheap Bibles to Wales,” he pleaded.

As Thomas Charles finished speaking, the Chairman temporarily lost control of the meeting and a number of people began speaking at once. In the confusion, Joseph Hughes was heard to say, “Surely a Society might be formed for such a purpose, and if for Wales, why not also for the Empire and for the world?”

The suggestion contained the germ of Bible Society and became famous in its history. When the committee rose to adjourn for breakfast, Joseph Hughes wrote this minute in the RTS records.

Mr Charles of Bala having introduced the subject, which had previously been mentioned by Mr Tarn, of dispersing Bibles in Wales, the Committee resolved that it would be highly desirable to stir up the public mind to the dispersion of Bibles generally, and that a paper in a Magazine to this effect may be singularly useful.  The object was deemed sufficiently connected with the object of this Society thus generally to appear in these minutes, and the Secretary who suggested it was accordingly desired to enter it.

Some people think that Charles persuaded his fellow committee members to make a favourable decision by telling them the story of Mary Jones. He may have done so – but we cannot be sure. D E Jenkins, in his three volume biography of Thomas Charles completed in 1908, examined the evidence and concluded that Charles made no specific mention of Mary, confining himself to speaking in general terms backed by hard facts which demonstrated the high demand and severely inadequate supply of Welsh Bibles.  However, we know more of the Mary Jones story now than Jenkins knew in 1908, and it may well be (as is sometimes maintained) that Charles himself later told both Mary and her (second) teacher, Lewis Williams, that her story had served him very usefully at the meeting in London in 1802.

You can read part 8 of this story at this blog tomorrow.