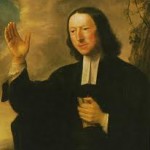 No-one was demonstrating outside St Paul’s cathedral when, on Wednesday 24 May 1738, at about five in the morning, John Wesley opened his Greek New Testament to these words: ‘Thus he has given us through these things, his precious and very great promises, so that . . . you may become participants in the divine nature’ (2 Pet. 1:4). Just before he left his house, he read again: ‘You are not far from the Kingdom of God.’

That afternoon he was invited to go to the new St Paul’s Cathedral (still less than thirty years old). He listened carefully to the words as the choir sang the anthem, ‘Out of the deep have I called unto thee, O Lord. Lord, hear my voice. O let thine ears consider well the voice of my complaint. If thou, O Lord, wilt be able to mark what is done amiss, O Lord, who may abide it? But there is mercy with thee; therefore thou shalt be feared . . . O Israel, trust in the Lord: For with the Lord there is mercy, and with him is plenteous redemption. And he shall redeem Israel from all his sins’ (Ps. 130:1–4, 7–8 BCP).

In the evening, as he recorded in his journal, he went ‘very unwillingly’ to a society in Aldersgate Street. This was almost certainly a society which met in Nettleton Court. George Whitefield had ministered there the previous year and Peter Böhler had formed the members into small groups who met together for Christian fellowship, Bible reading and prayer.

That evening at Aldersgate Street an Anglican, William Holland, read from Luther’s Preface to the Epistle of the Romans. ‘About a quarter before nine,’ Wesley’s famous journal entry reads, ‘while he was describing the change which God works in the heart through faith in Christ, I felt my heart strangely warmed. I felt I did trust in Christ, Christ alone for salvation, and an assurance was given me that he had taken away my sins, even mine, and saved me from the law of sin and death’.

Wesley spoke to all who were there that evening, telling them, as he put it, ‘what I now first felt in my heart’. But before very long, Wesley thought, ‘This cannot be faith; for where is your joy?’ After he returned home, he noted, ‘I was much buffeted with temptations; but cried out, and they fled away.’ In his journal he recorded what he learnt during this period in these words (the italics are Wesley’s): ‘Then was I taught that peace and victory over sin are essential to faith in the Captain of our salvation; but that as to the transports of joy that usually attend the beginning of it, especially to those who have mourned deeply, God sometimes giveth, sometimes withholdeth them, according to the counsels of his own will.’