What Disraeli said in his novel Sybil about ‘one nation’ 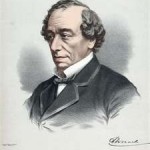 “Well, society may be in its infancy,” said Egremont slightly smiling; “but, say what you like, our Queen reigns over the greatest nation that ever existed.”

“Which nation?” asked the younger stranger, “for she reigns over two.”

The stranger paused; Egremont was silent, but looked inquiringly.

“Yes,” resumed the younger stranger after a moment’s interval. “Two nations; between whom there is no intercourse and no sympathy; who are as ignorant of each other’s habits, thoughts, and feelings, as if they were dwellers in different zones, or inhabitants of different planets; who are formed by a different breeding, are fed by a different food, are ordered by different manners, and are not governed by the same laws.”

“You speak of—” said Egremont, hesitatingly.

“THE RICH AND THE POOR.”

At this moment a sudden flush of rosy light, suffusing the grey ruins, indicated that the sun had just fallen; and through a vacant arch that overlooked them, alone in the resplendent sky, glittered the twilight star. The hour, the scene, the solemn stillness and the softening beauty, repressed controversy, induced even silence. The last words of the stranger lingered in the ear of Egremont; his musing spirit was teeming with many thoughts, many emotions; when from the Lady Chapel there rose the evening hymn to the Virgin. A single voice; but tones of almost supernatural sweetness; tender and solemn, yet flexible and thrilling.