The task for parents and godparents 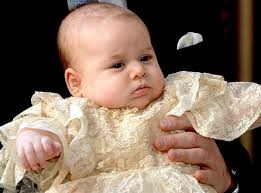 Speaking at Prince George’s baptism this Wednesday 23 October 2013 in the Chapel Royal, St James’s Palace, London, Archbishop Justin Welby said that George’s parents and godparents had a ‘simple task’: to make sure that he knew who Jesus was. ‘Speak of him, read stories about him. Introduce him in prayer. Help him to grow and flourish into the person God has created and has called him to be.’ I think we may all support the parents and godparents in this awesome task – both for Prince George and any new babies we know.