The preacher who surprised the people of Ilfracombe 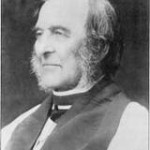 In the entire history of the Church of England there has only been one father and son who have both become Archbishops of Canterbury – Frederick and William Temple. Although Frederick was born in Santa Maura, in 1821 when the Ionian Islands were under British protection, he moved to live on a farm his father had bought in Axon, near Culmstock in Devon, at the age of nine. The first English land he saw when returning from the Mediterranean was Lundy, before landing in Bristol.

As they drove through Bristol in a post-chaise carriage, Frederick began to cry.

‘Why are you crying?’ his mother asked. ‘Because the people are so ugly!’ Frederick replied.

In Santa Maura, his mother had spoken of the charms and beauties of England, its fruitfulness and its people. Evidently the reality did not live up to Frederick’s expectation.

Eighteen years later Frederick Temple arrived as an undergraduate at Balliol College, Oxford, fresh from Blundells School in Tiverton. He wrote to his mother that he had heard Dr Edward Bouverie Pusey preach. 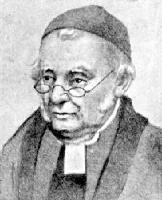 As well as being Regius Professor of Hebrew, Pusey was a Canon at Christ Church cathedral which is where Temple listened to him.

‘I do not think I ever heard a more beautiful sermon,’ Temple told his mother. ‘He spoke very strongly against the increasing luxury of Oxford … He ended with a warning to those who are studying Divinity not to suppose that they could get such knowledge by mere intellectual exercise of the mind; that it required a high degree of moral training even to understand these truths, and that such knowledge was not to be obtained by anything but the gift of the Almighty: the true way to study Divinity would not be to read day and night, but to add to your studies a life of prayer and practical holiness. The sermon lasted nearly two hours, but I could have listened an hour longer, I am sure….’

Just five years later, Dr Pusey was in Ilfracombe, preaching on August 11th, 1844, at Holy Trinity, in support of his friend, the Reverend John Chanter, in aid of funds for ‘a new church at the foot of Capstone Hill’. A fortnight later Pusey preached a second sermon in Ilfracombe and, according to Pusey’s biographer, H P Liddon, ‘the church was crowded, and a great many Dissenters formed part of the congregation. They were surprised at Pusey’s evangelical tone – in the true sense of that expression, at the sincerity and fervour with which he enforced those truths of Revelation which they too sincerely held. They joined in a request that his sermons might be printed.’

Twenty-five years later Frederick Temple became Bishop of Exeter, and, after twelve years in Exeter, when he was 60, his son William, destined also to become Archbishop of Canterbury, was born in the Bishop’s Palace. The twists and turns of the building of the ‘new church at the foot of Capstone Hill’ is a story for a later post!