The man the Archbishop of Canterbury would have loved to meet 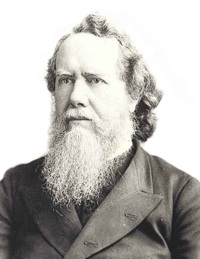 The Archbishop of Canterbury, Justin Welby, visited this year’s Soul Survivor – an annual major Christian youth event in Britain. He was interviewed while there and the interview is available on U-Tube. At the end of the interview he was asked which four figures from history he would like to spend an evening with. Caught on the hop, he replied St Benedict (‘He changed the course of western civilisation’), Admiral Nelson (to talk about his leadership skills), the missionary to China James Hudson Taylor (‘I would love to hear him talk about Jesus’) and Winston Churchill (his leadership skills).

A major new film about Hudson Taylor is being produced by Half Crown Media in Littleton, Colorado, and I was privileged to visit the team in May this year.

One of my favourite stories about Hudson Taylor concerns a visit to him by Henry Frost who came from a successful American family which had been involved in the founding of Harvard College. Not yet thirty years old in November 1887 when he first met Hudson Taylor, Frost had come to England to suggest that Taylor should establish a branch of the China Inland Mission (now OMF) in North America.

When he was shown into Taylor’s room in Pyrland Road, Stoke Newington, London (the house still stands), the man who rose from his desk and walked towards him was, as Frost recalled later, ‘shorter than I had expected, and had fair, blue eyes and the pleasantness and gentlest of voices’. It seemed to Frost at this moment he had a revelation ‘first of a man and then of his God. Never before had I seen one so humbly tender or so divinely noble.’

In the following summer, 1888, Hudson Taylor made his first visit to America where he preached at a series of conferences. Recalling the weeks that Hudson Taylor stayed in the Frost family home in Attica, Henry Frost wrote: ‘I was always watching Taylor in those days out of the corner of my eye. To tell the truth, he was in some ways a mystery to me… It was not that he was unnatural. Indeed I have never seen anyone so natural as himself. Nor was it that he was spiritually fantastic. He was the sanest man I ever had to do with. Nevertheless there was a spiritual quality about him which gave me surprises at every turn and kept me on the look-out for new and strange experiences.’