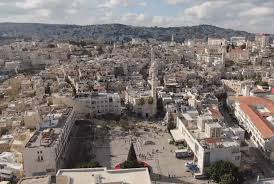 Bethlehem, like Jerusalem, can be snowy in winter so maybe those wintry scenes on our traditional Christmas cards are not too far off the mark. A main feature of any visit to the town is the Church of the Nativity built over the cave where, according to a strong and rarely challenged tradition, Jesus was born. The present church dates from the latter part of the sixth century and is the oldest complete church in Christendom.

But why a cave and what is the historical evidence for this being the authentic site of the birth of Jesus? Well, although there is no mention in the Gospels of Jesus being born in a cave, still today I’m told that you can see primitive shepherd homes in these Judaean hills where families live directly above a cave which provides natural shelter for their animals.

Certainly local people would have remembered the birth – especially the shepherds who must often have been asked by their children and grandchildren, to tell again of how they saw what they described as angels in the sky on that first Christmas night. Today there are two principal sites which commemorate the place where God gave the shepherds ‘news of great joy for the whole nation’ (Luke 2:10), one marked by a red-domed Greek Orthodox church and the other owned by the Franciscans. Of course we can’t be sure exactly where the event occurred, but anywhere at the bottom of the hill east of the ‘little town’ it’s easy to imagine the shepherds tending their sheep. You can apparently still see sheep and goats nibbling the rather scrubby pasture by the roadside.

The visit of the Magi must also have been a memorable event and oral tradition – that is stories passed down the generations – of the birth of Jesus seem to have been strong. In AD 135 the Roman Emperor Hadrian gave orders that a grove, dedicated to the pagan god Adonis, should be planted close to the cave. It was in Bethlehem that St Jerome (AD 386-404) translated the Bible from Hebrew and Greek into Latin and Jerome suggested that Hadrian’s real motive was to divert attention from the site of the nativity. If so, contrary to his intention, the Emperor in effect marked the location of the birth of Jesus for the next two hundred years.

In AD 155, the Christian missionary Justin Martyr wrote about the Bethlehem cave surrounded by a grove dedicated to Adonis, and the writer Origen confirmed the same tradition in AD 215. Then in AD 315, the Emperor Constantine, having become a Christian, directed that a magnificent church be erected over the cave. His building stood for two hundred years before being extensively damaged during the first half of the sixth century. Later in the same century, the Emperor Justinian erected a larger church on the site incorporating parts of Constantine’s structure in the present Church of the Nativity.

I am making my first visit to Bethlehem next Easter and look forward to visiting these sites so full of memories of the place where our Saviour was born.