The Devon men who shaped the infant Church of England 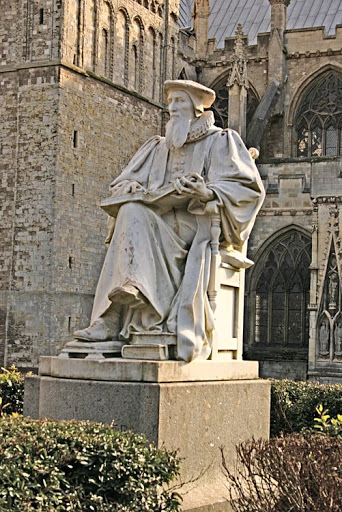 It is remarkable that two of the thinkers who shaped Anglicanism in the first 50 years of its existence were both Devon men, and one of them was actually born in our group of churches – John Jewel who was born in Bowden Farmhouse just south of the village of Berrynarbor in 1522. 32 years later, Richard Hooker was born (like me as it happens) in Heavitree, Exeter. Since his father’s work took him to Ireland for extended periods, Hooker was brought up by his uncle, John Hooker, who was an early historian of Exeter, and had a home close to the cathedral. They sent Richard to Exeter Grammar school and, since he was a bright boy, John Jewel, who was now Bishop of Salisbury, managed to get him a place at Corpus Christi College, Oxford. Before long, he was promoted to become a tutor at the college and in 1581 became a Fellow and took Holy Orders.

Hooker had few social graces and is said to have asked his landlady to find him a wife. Eventually he married a wealthy young woman, the daughter of a London merchant, called Joan Churchman, and this gave him the financial security needed to spend much of his time in thought, research and writing. The couple had six children.

Queen Elizabeth I noticed Hooker’s work and appointed him Rector of the Temple Church in London. By most accounts, preaching was not his greatest gift, but his congregation of lawyers, judges and members of parliament stimulated his ideas. As a religious thinker, he travelled the country, addressing audiences and arguing for his views. He wished to promote a moderate, tolerant church, open to all for the worship of God. It was while at the Temple that Hooker published the first of 8 parts of his great work Of the Laws of Ecclesiastical Polity, which argued that the newly formed Church of England should ‘…hold up the highest ideal of a church rooted in antiquity, ever studious in Scriptural and primitive Christianity, and, at the same time, large minded, open and tolerant’. It was this work that gave the young Church of England a reasoned defence and helped shape the England of today. Some consider him the ‘father of Anglicanism’ – although the term ‘Anglican’ did not come into common use until the nineteenth century.

Richard Hooker ended his days as the vicar at Bishopsbourne in Kent and died on 2nd November 1600 at the early age of 46. The Church of England Synod still refers to his writings when considering theological issues.

The citizens of Exeter did not forget one of their greatest sons and, at the end of the nineteen century, commissioned a statue of him which you have probably seen in the cathedral close in Exeter. It is carved out of white marble and weighs over 2 tons. The statue was sculpted by Alfred Drury at a cost of a thousand guineas, and paid for by Robert Hooker of Weston Super Mare, a descendent of an uncle of Hooker. Drury used a portrait of Hooker by a Flemish artist that is held in the National Portrait Gallery. After a service in the cathedral on 25 October 1907, the Bishop of Exeter, Archibald Robertson, led a procession to the statue and unveiled it in the presence of a large crowd. Within a few hours, postcards of the statue were for sale at Mols Coffee House in the cathedral green. The coffee house is still there but I’m afraid they’ve run out of the postcards.
In October 2010, the cathedral authorities replanted the trees on the Green, relaid the footpaths and moved Hooker’s statue some 5 metres forward, on to a new plinth, to face the northern entrance at Martins Lane. This means that you can now view the statue at closer quarters, without having to step onto grass. We should be proud of the contribution of Devon men to making the Church of England what it is today.