Stories with the ring of truth 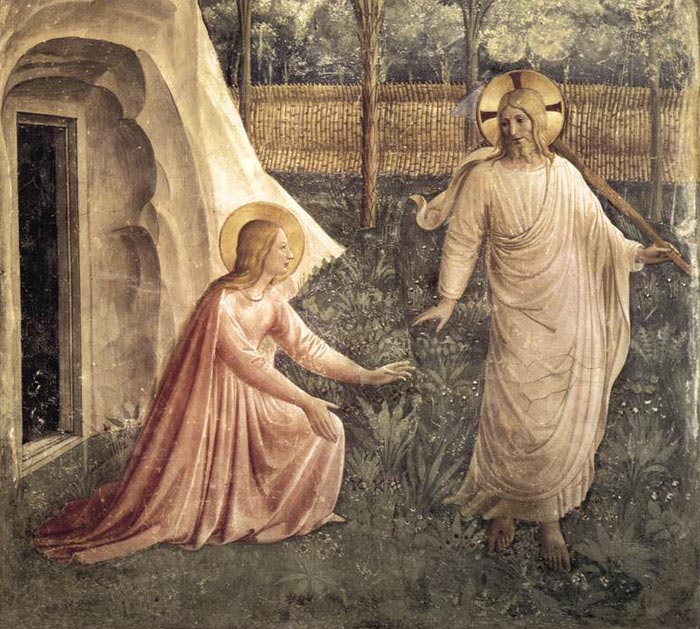 Every Easter when I re-read the stories of Jesus appearing to his disciples on the first Easter Sunday, I am convinced that no one could have made them up. Perhaps the most touching is the account of Jesus appearing to Mary Magdalene recorded for us at John 20:10-18. The encounter was memorably painted by Fra Angelico who entered the Dominican order of Friars in 1407 and was active as a painter in Florence by 1417. In 1438 the Convent of St Marco in Florence was given to Dominicans and the complex of buildings there rebuilt. The work of decorating the walls was entrusted to Fra Angelico who carried out the work in the 1440s with the help of his assistants.

On the wall of Cell 1 of the Convent, Fra Angelico painted the fresco Noli me tangere, meaning ‘Do not cling to me’. Christ appears to Mary Magdalene on the first Easter Sunday. She has been weeping after discovering that the tomb of Jesus is empty. In the hazy early morning light, a figure appears. At first she mistakes him for a gardener.

‘If it is you, sir, who removed him,’ she says, ‘tell me where you have laid him, and I will take him away.’

Was a single word ever charged with more emotion that this! In her joy she turns and says ‘Rabboni!’ (Hebrew for ‘Master’).

William Temple, who was born in Exeter and became Archbishop of Canterbury in 1942, thought that Fra Angelico’s fresco of the Lord’s appearance to Mary was ‘delicious’ and ‘perfectly caught its tone and feeling’.

Commenting on Jesus’s instruction to Mary not to cling to him, Temple wrote (in his Readings in St John’s Gospel): ‘The weakness to which such love as Mary’s is liable is that it clings too closely to the physical form, of which the whole purpose is to serve the spiritual self. To her therefore this warning is appropriately given, but its meaning is for all. She must learn to love and trust and serve, even though she can no longer caress his feet or hear his voice pronounce her name. Not to the Lord as he tabernacle in the flesh, subject to all the limitations of the body, is she to cling; but to the Lord in his perfect union with the Father.’

Fra Angelico led the devout and ascetic life of a Dominican friar and followed the practice of his order in caring for the poor. It was said that he was always good-humoured. He used to say that he who illustrates the acts of Christ should be with Christ. Apparently he never handled a brush without fervent prayer and he wept when he painted a Crucifixion.  He was reported to say ‘He who does Christ’s work must stay with Christ always’. He died in 1455.

Until recently San Marco still housed a community of Dominican friars but in 2014 the few friars remaining were transferred to join another nearby community. The convent is now home to the Museo Nazionale di San Marco where, on a visit to Florence, you can still see Fra Angelico’s inspiring fresco.