St Helena’s search for the cross 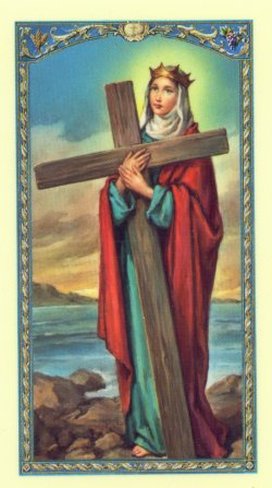 Preparing to visit Jerusalem this Easter I have been fascinated to look into the life of St Helena. Born around the year 255, she became the wife of Roman Emperor Constantius Chlorus, by whom she gave birth to Constantine in 274. When her son became Emperor in 306, Helena was raised to a position of great honour in the Empire and, as a Christian, zealously promoted the cause of her faith. When Constantine himself became a Christian he made Christianity the state religion in 324  though maintaining a policy of religious freedom. He ordered that Sunday should become a public holiday.

Macarius, Bishop of Jerusalem, told Emperor Constantine that Calvary and the tomb of Christ were to be found buried under the Temple to Venus and the statue of Jupiter. Constantine announced that he wanted to ‘make this most blessed spot, the place of the resurrection, visible to all and given over to veneration’.

In 326, now in her early 70s, Helena visited the Holy Land and joined Bishop Macarius in petitioning her son, the Emperor, to demolish the temple, excavate the tomb and build a church on the site. When he agreed she oversaw the demolition work. The whole area, when cleared, revealed a small mound and three crosses which Helena believed to be the site of Calvary, while a little to the west was a rockface which she believed contained the tomb of Jesus. Her son wrote to Bishop Macarius: ‘No words can express how good the Saviour has been to us … that monument of his Holy Passion, hidden for so many years, has now at last been restored to the faithful and set free by the defeat of our common enemy, it is indeed a miracle. My great wish is, after freeing the site of impious idols, to adorn it with splendid buildings.’

When you have grown up singing Mrs Cecil Frances Alexander’s famous hymn recalling the green hill outside the City wall you may find it confusing that Jesus was crucified in the middle of a city. But you should bear in mind that 2000 years ago this was indeed an empty plot of land outside the city.

And so today the site of the crucifixion and resurrection of Christ is housed in a massive richly decorated church – making it difficult for the hundreds of tourists and pilgrims who visit every day to come to terms with. However the archaeological and historical validity of the site is substantial. The present building is the fourth on the same site and was erected by Crusaders in the twelfth century, The first church, built by Constantine, was almost twice the length.

Some Christians find the Garden Tomb, situated close to the Damascus Gate, more in keeping with their expectations. This tomb may well have existed at the time of Christ and is a helpful visual aid to the events of the first Easter. But sadly there is virtually no archaeological or historical evidence to support its validity – even if it is a peaceful place to meditate and give thanks. When I visit both sites this Easter I hope to call to mind Thomas Kelly’s magnificent words: ‘The cross! it takes our guilt away, it holds the fainting spirit up; it cheers with hope the gloomy day and sweetens every bitter cup’.