Richard Hooker and the Anglican way to worship

Heavitree, when I grew up there, had been for many years a suburb of Exeter. But when Richard Hooker (1554-1600) was born there, Heavitree was separated from Devon’s county town by fields and meadows. Richard Hooker proved to be an exceptionally bright child with an ability to apply himself to study, and John Jewel, about whom I wrote here in October, managed to get him a place at Corpus Christi College, Oxford, where he became a Fellow in 1577 and deputy Professor of Hebrew a couple of years later.

Hooker’s famous eight volume book Of the Laws of Ecclesiastical Polity, published between 1594 and 1597, was an answer to the Puritan case against the still recently established Church of England. The book is lengthy, detailed and judicious, but not dull. There are passages where he uses gentle humour, but he never writes with malice even when taking apart his opponents’ arguments. Despite his love of very long sentences, his English prose is masterly.

Puritans accused the Church of England of being hopelessly ‘corrupted with Popish orders and ceremonies’. But Hooker argued that worship should not appeal just to the mind with many words and long sermons but also include that which appeals to the sight and imagination. These things are more memorable than mere speech. As well as dealing with worship he also wrote with insight and originality about the relationship between reason and Scripture; preaching; prayer; liturgy; the sacraments; the Eucharist; priesthood (he admitted to preferring the term presbyter to priest); bishops; and (at great length) justification.

At Christmas time, summer seems a long way off – but I’ll try to imagine it. One of my favourite places to enjoy a summer’s afternoon is the cathedral close in Exeter. In the cool shadow of the nearly 900-year-old cathedral towers, I marvel at the wisdom of the citizens of Exeter in commissioning Alfred Drury to carve his fine statue of Richard Hooker. There he sits in an armchair with his open Bible, a pigeon perched disrespectfully on his head. How many carefree tourists are aware of the wisdom and scholarship of one of the most interesting thinkers the English Church ever produced? 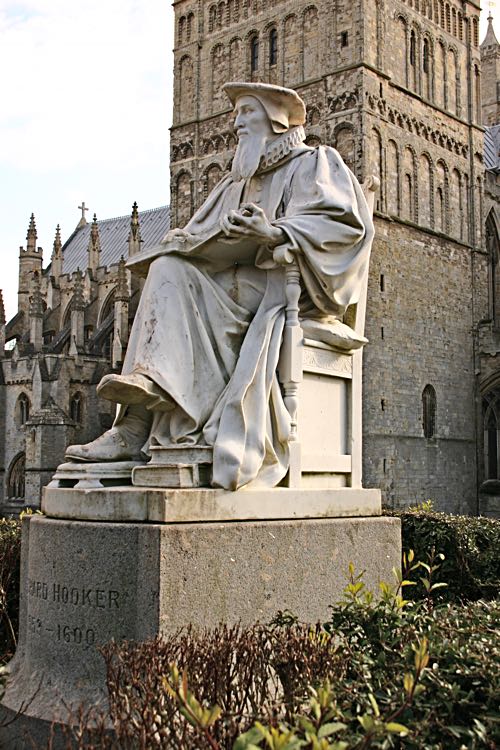