Pope Francis and the evangelical pastor 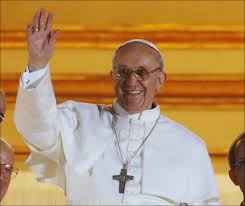 In off the cuff remarks yesterday,  Pope Francis told crowds in St Peter’s Square that he spent roughly 40 minutes praying with an evangelical pastor before leaving his residence where both prayed to seek unity among Christians.

“We Catholics must pray with each other and other Christians,” the Pope said. “Pray that the Lord gift us unity! Unity among ourselves! How will we ever have unity among Christians if we are not capable of having it among us Catholics,…in the family, how many families fight and split up? Seek unity, unity builds the Church and comes from Jesus Christ. He sends us the Holy Spirit to build unity!”

Hot summer temperatures in Rome didn’t stop 50,000 pilgrims from gathering in St. Peter’s Square for Pope Francis’ weekly General Audience. He focused his homily on the Church as the Body of Christ and the importance of unity among Christians.

Recounting the event of the conversion of St. Paul, the Pope said that the words of Christ, “I am Jesus whom you are persecuting”, indicate the deep union that exists between Christians and Christ.”

“When Jesus ascended into heaven he did not leave us orphans, but with the gift of the Holy Spirit, our union with Him has become even more intense,” the Pope said. “The Second Vatican Council says that Jesus ” communicating His Spirit, Christ made His brothers, called together from all nations, mystically the components of His own Body.”

The image of the body in St. Paul’s Letter to the Corinthians helps us to understand the depth of what the Holy Father described as the “Church-Christ bond.” The Church, the Pope said, “is not an charitable, cultural or political association, but a living body, that walks and acts in history.”

“And this body has a head, Jesus, who guides, feeds and supports it. This is a point I want to emphasize: if the head is separated from the rest of the body, the whole person cannot survive. So it is in the Church, we must remain bound ever more deeply to Jesus. But not only that: just as the body needs the lifeblood to keep it alive, so we must allow Jesus to work in us, that His Word guide us, that His presence in the Eucharist nourish us, animate us, that His love gives strength to our love of neighbor. And this always!

Reflecting on the second aspect of the Church as the Body of Christ, Pope Francis told the pilgrims that although the Church consists of a diverse variety of people, “we form one body, as we were all baptized by one Spirit into one body.”

The communion and unity that exists between Christians, he continued, show the richness of the gifts distributed by the Holy Spirit.

“Let us remember this well,” the Pope exhorted the faithful, “being part of the Church means being united to Christ and receiving from Him the divine life that makes us live as Christians; it means remaining united to the Pope and the Bishops who are instruments of unity and communion, and also means overcoming personal interests and divisions, in order to understand each other better, to harmonize the variety and richness of each member; in a word, to love God and the people who are next to us more, in the family, in the parish, in the associations.”

Pope Francis also emphasized the need for unity among all Christian communities, saying that in order for the Body to live, all its limbs must be united. Unity, he exclaimed, “is beyond all conflict.”