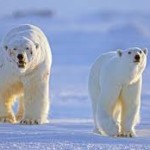 Sir David Attenborough is one of this country’s finest journalists, and a great expert on animal life. Unfortunately, however, when it comes to global warming he seems to prefer sensation to objectivity in the final episode of Frozen Planet to be broadcast on BBC1 on December 7.

Had he wished to be objective, he would have pointed out that the polar bear population has not been falling, but rising.

Had he wished to be objective, he would have mentioned that recent research findings show that the increased evaporation from the Arctic ocean, as a result of warming, causes there to be more cloud cover, thus counteracting the adverse effect he is so concerned about.

Had he wished to be objective, he would have noted that, while there was indeed a modest increase in mean global temperature (of about half a degree Centigrade) during the last quarter of the 20th century, so far this century both the UK Met Office and the World Meteorological Office confirm that there has been no further global warming at all.

What will happen in the future is inevitably unclear. But two things are clear. First, that Sir David’s alarmism is sheer speculation, devoid of any scientific basis. Second, that if there is a resumption of warming, the only rational course is to adapt to it, rather than to try (happily a lost cause) to persuade the world to impoverish itself by moving from relatively cheap carbon-based energy to much more expensive non-carbon energy.

Already the programme has caused controversy after it was revealed that the BBC is offering broadcasters in countries like the US, where there is more scepticism about global warming, the option of buying the series without the ‘climate change episode’ at the end.