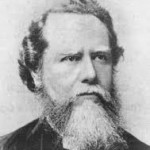 If all goes according to plan, The One Show on BBC1 at 7 pm this evening will feature James Hudson Taylor.Taylorwas born in a room above his father’s pharmacy in Barnsleyin 1832. He later became a missionary to China, where he stayed for 50 years and founded the China Inland Mission, one of the largest Christian movements in the world. He died in 1905.

A plan to honour the missionary could mean an unlikely influx of Chinese tourists toBarnsley. James Hudson Taylor played an important role in taking Christianity toChinaand is revered by millions of Christians acrossAsia.

Barnsley’s James Hudson Taylor Group is hoping to set up a trail in the town to recognise his work, and local businessmen believe it could become a place of pilgrimage for thousands of Chinese Christians.

John Foster, who runs a bakery inBarnsley, said it was incredible that Hudson Taylor was such a noted figure in the Asia-Pacific region but virtually unknown in his home town.

“If you go round Barnsleyand ask people about James Hudson Taylor, they’ll know absolutely nothing,” Mr Foster said. “But he’s probablyYorkshire’s biggest export. He took Christianity toChinaand in the Asia-Pacific region there isn’t a Christian who will not have heard of him.

“He’s their founding father, like Wesley is to the Methodists. Yet in his home town, he’s not known.”

Mr Foster said the group wants to put a series of plaques around the town to mark the places where Hudson Taylor was born, lived and preached. And the revamped town museum is set to open later this year with a section on his achievements.

Mr Foster said he is sure Chinese visitors will flock to pay their respects to Hudson Taylor. He said a group of Chinese Christians were seen kissing the ground near the missionary’s birthplace during a visit a few years ago.

Dickie Bird, the internationally known cricket umpire who was born inBarnsleyis a committed Christian and fully supports this new initiative.

It is really old, simple and beautiful. It is a legally protected building under English law due to its special historic interest. Christians still worship there – it is a Church. Hudson Taylor’s father was a pharmacist with a shop inBarnsleytown centre. James Hudson Taylor himself was born in the living accommodation of that shop and later he worked there. There is still a pharmacy shop on that location: “Boots the Chemist”, Cheapside Barnsley.

I have written three books about Hudson Taylor including ‘J Hudson Taylor: A Man in Christ’. The lowest priced copies of this book are available at http://www.10ofthose.com/products/11/J-Hudson-Taylor-Man-In-Christ-PB/

I will be telling you more about the Barnsley plans and Hudson Taylor the man on this website over coming weeks.