From the hedgerows of Devon to the Foreign Office

The earliest known photograph of Ernest Bevin shows him as a little boy of three wearing a wide-brimmed straw hat and sailor suit at a Sunday-school treat in 1884. He was born in Winsford, Somerset, on 7 March 1881. His mother, born Diana Tudball, had married William Bevin in 1864 but from 1877 Diana described herself in various documents as a widow. Who Ernest’s father was remains unknown: when his mother registered his birth she left the father’s name blank and this is confirmed by the baptismal register in Winsford Church.

Diana Bevin, or Mercy Bevin as she was commonly known, a staunch Nonconformist, sent her children to the church school in Winsford, and on Sundays to the Wesleyan Sunday School with his two elder brothers. On 1 May 1889, Mercy died at the age of forty-eight, with her mother and children at her bedside. Ernest was eight but never forgot his mother and the love she showed him. After the funeral, Ernest returned to his mother’s cottage where for the last time Diana Bevin’s seven children met as a family. The home was broken up, the furniture sold, and Ernest’s older half-sister, Mary, and her husband George Pope, a railwayman, offered to take him into their home at Morchard Bishop. Ernest Bevin arrived in Devon in the early summer of 1889.

For a few months in the summer of 1889, Ernest attended Morchard Bishop Church School, and then in October George Pope and his wife moved to the neighbouring village of Copplestone. The house, then known as Tiddly-Winks but since renamed Lee Mount, was later occupied by my own great uncle, Bill Steer, Copplestone postman in the 1940s and 50s. The cottage is built above the cutting through which runs the railway line from Exeter to Barnstaple. It stood in the parish of Down St Mary until Copplestone became a civil parish in 1992.

Years after Bevin left Copplestone, an earlier postman remembered ‘on my rounds early on a winter’s morning seeing that young boy getting water for the house or cleaning potatoes on the shute. There were two little streams which came down across a steep field opposite the house and broke through the hedge to the roadside. They didn’t have pumps then. The water was always icy cold and I’d see the boy getting water and his hands all covered with broken chilblains’.

A year before Ernest Bevin arrived in Copplestone, they had opened Ebenezer Chapel on the other side of the railway cutting half a mile to the south. Ernest went to the chapel every Sunday. On weekday mornings he walked two miles down the valley through the deep lanes to Colebrooke, where a few houses were clustered around the 14th-15th century church on a hillside above Coleford. Ernest attended Colebrooke’s Board School which had been opened in 1874 to serve the surrounding district. The boy spent less than a year there and an old log-book briefly records: ‘August 8, 1890, E.Bevin has left.’

Mary Pope had found her younger half-brother a place at Hayward Boys’ School in Crediton four miles southeast of Copplestone. Ernest made the daily journey by train with a pass which his guardian, George Pope, was able to secure as a railway-worker. Bevin entered the school on 2 September 1890.

By the end of his first year at Hayward’s, Ernest had reached Standard IV and was entitled to claim his Labour Certificate. In fact, he stayed on at the school for almost another year and didn’t leave until 25 March 1892. He found a job as a farm-boy at Chaffcombe, close to Copplestone, where he lived in and worked ten hours a day for a wage of sixpence a week (paid in a lump sum of six shillings and sixpence every three months). On the farm he learned to carry out a variety of jobs from stone picking to driving cattle and cutting up mangles and turnips for their fodder.

As a child who had been to school, he was pressed into service in the evenings reading out items of news and leading articles from the Bristol papers while the family sat round the fire in the farm-kitchen.

During the winter of 1892-3, Ernest moved to another farm, Beers, up the hill just outside Copplestone village on the road west to Okehampton. The farm is still farmed as it was then by the May family. Bevin had a room in an outbuilding overlooking the farmyard, reached by narrow winding stairs from the yard itself. William May paid him a shilling a week in addition to his board. They say in Copplestone that Ernest left a little over a year later after a quarrel with his employer, farmer May.

When a letter arrived in Copplestone from Ernest’s brother Jack urging him to come to Bristol, he jumped at the chance and in the spring of 1894 – the year Gladstone resigned for the last time, death duties were introduced, parish councils established and Blackpool Tower opened – Bevin set off for the big city.

After holding a series of jobs, Ernest Bevin found regular work as a van driver delivering ginger beer in Bristol. In 1905 he became the unpaid secretary of the Bristol Right to Work Committee, and in 1910 he formed a carters’ branch of the Dockers’ Union in that city. By the end of World War I he was functioning as the union’s assistant general secretary. In 1921 he amalgamated several unions into the Transport and General Workers’ Union, of which he was general secretary until 1940 and which became the largest trade union in the world. From 1925 he was a member of the general council of the Trades Union Congress (TUC) and in 1937 was elected its chairman. He was prominent in organizing the general strike of May 3-12, 1926, and was also instrumental in settling it.

During the early years of the Great Depression he criticized Ramsay MacDonald’s second Labour government (1929-31) for failing to enact radical measures to relieve unemployment, and he refused to support MacDonald’s national coalition ministry (1931-35). 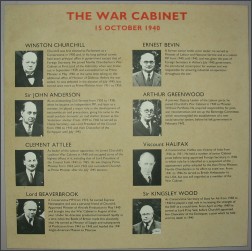 Through the 1930s he advocated British rearmament and a firm foreign policy to counteract the growing threat of Nazi Germany and Fascist Italy. In May 1940, when Winston Churchill formed his wartime coalition government, Bevin was appointed minister of Labour and National Service and was included in the War Cabinet. When Clement Attlee formed his government on July 26, 1945, he chose Bevin as his Foreign Secretary. Quickly losing his optimism about the Soviet Union, he argued against recognition of new Soviet-sponsored governments in the Balkans. To facilitate the economic and defensive rebuilding of western Europe, which was then the main theatre of the Cold War, he helped establish the Organisation for European Economic Co-operation in April 1948 and signed the North Atlantic Treaty in Washington April 1949. On 6 January 1950, the United Kingdom offered recognition to the People’s Republic of China, contrary to United States policy. Before ill health forced his resignation on his 70th birthday, March 9, 1951, Bevin initiated the Colombo Plan for economic development of South and Southeast Asia. For the last five weeks of his life he was lord privy seal.

He died on April 14, 1951, having been one of the most powerful British union leaders in the first half of the 20th century. He had proved to be a forceful minister during World War II and an effective foreign secretary in the immediate postwar period. 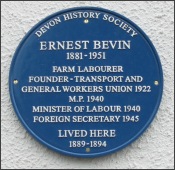 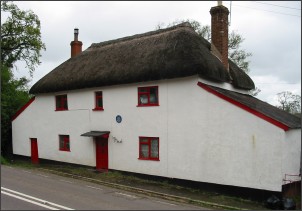 In April this year the Devon History Society has mounted a plaque at Lee Mount in Copplestone.

When King George VI asked Bevin where he had gained his knowledge, he replied ‘from the hedgerows of experience’. He is almost certainly the only Cabinet Minister ever to have lived in the village of Copplestone.