From the Boston bombings to a civilization of love 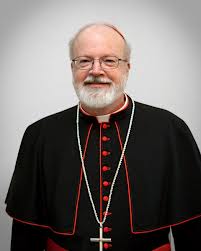 Jesus said “they will strike the  and the sheep will scatter”; that is what happened to His disciples after the Crucifixion, as they scattered in fear, doubt and panic.

On Easter the Good Shepherd returns to gather the scattered; Mary Magdalene in grief, Thomas in doubt, Peter in betrayal. We too are scattered and need the assurance of the Good Shepherd, who lays down his life for us, who comes to gather us in our scattered in our brokenness and pain, scattered by failed marriages, lost employment, estranged children, illness, the death of a loved one, soured relationships, disappointments and frustrations.

This week we are all scattered by the pain and horror of the senseless violence perpetrated on Patriots Day. Last Sunday at the 11:30 Mass here at the Cathedral of the Holy Cross, Fr. O’Leary led a special blessing for the many runners who participated in the Mass. Some people here were among those injured and those who witnessed the terrible events that unfolded at the finish line of the Marathon, but everyone was profoundly affected by the wanton violence and destruction inflicted upon our community by two young men unknown to all of us.

It is very difficult to understand what was going on in the young men’s minds, what demons were operative, what ideologies or politics or the perversion of their religion. It was amazing to witness, however, how much goodness and generosity were evidenced in our community as a result of the tragic events they perpetrated.

It reminds me of a passage in Dorothy Day’s autobiography where she speaks about experiencing a serious earthquake in California when she was a young girl. Suddenly neighbors that never spoke were helping each other, sharing their food and water, caring for children and the elderly. She was amazed and delighted, but a few weeks later people retreated to their former individualism and indifference.

Dorothy Day spent the rest of her life looking to recapture the spirit of community. That led her to the Communist Party and eventually it led her into the Catholic Church and to found the Catholic Worker Movement, dedicating herself to the care of the homeless, the drug addict

This past week we have experienced a surge in civic awareness and sense of community. It has been inspiring to see the generous and at times heroic responses to the Patriots Day violence. Our challenge is to keep this spirit of community alive going forward. As people of faith, we must commit ourselves to the task of community building.

Jesus teaches us in the Gospel that we must care for each other, especially the most vulnerable; the hungry, the sick, the homeless, the foreigner; all have a special claim on our love. We must be a people of reconciliation, not revenge. The crimes of the two young men must not be the justification for prejudice against Muslims and against immigrants.

The Gospel is the antidote to the “eye for an eye and tooth for a tooth” mentality. The parable of the Good Samaritan is the story about helping one’s neighbor when that neighbor was from an enemy tribe, a foreign religion, a hostile group. The Samaritan cuts through centuries of antipathy by seeing in the Jewish man who had been beaten and left for dead not a stranger or an enemy, but a fellow human being who has a claim of his humanity and compassion.

We know so little about the two young men who perpetrated these heinous acts of violence. One said he had no friends in this country, the other said his chief interests were money and his career. People need to be part of a community to lead a fully human life. As believers one of our tasks is to build community, to value people more than money or things, to recognize in each person a child of God, made in the image and likeness of our Creator.

The individualism and alienation of our age has spawned a culture of death. Over a million abortions a year is one indication of how human life has been devalued. Violent entertainment, films and video games have coarsened us and made us more insensitive to the pain and suffering of others. The inability of the Congress to enact laws that control access to automatic weapons is emblematic of the pathology of our violent culture.

When Pope John Paul II visited Madrid in 2003, addressing one million young people, he told them; “Respond to the blind violence and inhuman hatred with the fascinating power of love.” We all know that evil has its fascination and attraction but too often we lose sight of the fact that love and goodness also have the power to attract and that virtue is winsome. Passing on the faith means helping people to lead a good life, a moral life, a just life. Thus part of our task as believers is to help our people become virtuous.

Plato thought that virtue was knowledge. As Chain Ginott, the concentration camp survivor, reminds us, doctors, nurses, scientists and soldiers were part of the Holocaust machinery, showing that knowledge is not virtue, and often science and technology have been put at the service of evil. It is only a culture of life and an ethic of love that can rescue us from the senseless violence that inflicts so much suffering on our society.

Like Christ our Good Shepherd, we who aspire to be Jesus’ disciples and to follow His way of life, we too must work to gather the scattered, to draw people into Christ’s community. It is in His Gospel that we find the answers to the questions of life and the challenging ideals that are part of discipleship; mercy, forgiveness, self sacrifice, service, justice and truth.

John Lennon once said, ‘Everything will be OK in the end. If it’s not OK, it’s not the end.’ Our faith goes beyond that optimism. Love is stronger than death. We are going to live forever in the Resurrection Christ won for us on the Cross. The innocent victims who perished this week; Martin Richard, Krystle Campbell, Lu Lingzi, Officer Sean Collier, will live in eternity. Life is not ended, merely changed – that is the message of Easter. As Martin Luther King expressed, ‘Death is a comma, not a period at the end of a sentence.’

Although the culture of death looms large, our Good Shepherd rose from the grave on Easter and His light can expel the darkness and illuminate for us a path that leads to life, to a civilization of solidarity and love. I hope that the events of this past week have taught us how high the stakes are. We must build a civilization of love, or there will be no civilization at all.