From Devon to the throne 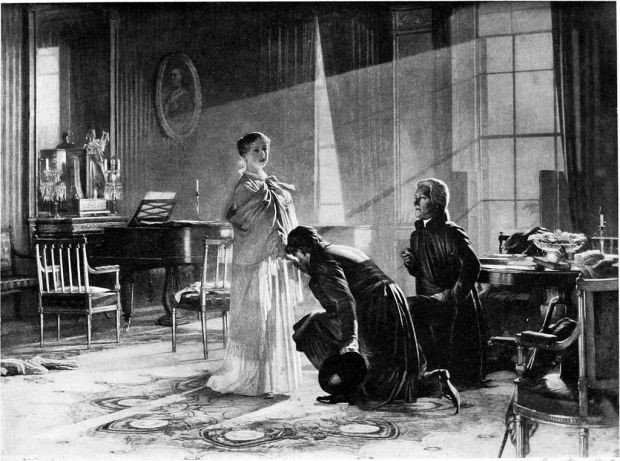 Princess Victoria first saw the sea at Sidmouth. Her father (Frederick, Duke of Kent, the fourth son of George III) had come from Germany to England on borrowed money, and his creditors were pursuing him. A captain in the army had found the money to pay for the journey to Sidmouth, and the party travelled in private carriages, calling at Windsor to see King George III who had now lost his reason, sight and hearing. He died eight months later. At Sidmouth the royal party stayed at Woolbrook Cottage, now the Royal Glen Hotel.

Victoria’s father often carried the princess on Sidmouth beach, showing her to visitors. ‘Look well at her,’ he said, ‘for she is to be your queen’. Sadly, Frederick was taken ill and died in Sidmouth on 23rd January 1820, six days before his father George III. His widow and now eight month-old Victoria were brought back to Kensington Palace by her uncle, Prince Leopold of Belgium, as the ten year reign of another of her uncles, George IV, began.  Prince Leopold became a father figure to her. When George IV died in June 1830, William IV, the third son of George III, became King at the age of 65. Victoria, who was now eleven years old, became next in line to the throne.

One month after her 18th birthday, early in the morning of Tuesday, June 20th  1837, William IV died at Windsor Castle in the arms of Queen Adelaide. The Archbishop of Canterbury, William Howley, who had performed the last rites, took leave of Queen Adelaide and drove with the Lord  Chamberlain in the darkness through country lanes to Kensington. At five in the morning they arrived at  Kensington Palace but found great difficulty in getting in. The porter at first refused either to grant them entry or to rouse the young princess. Eventually the porter allowed the two  men in and sent for the Baroness Lehzen who reluctantly agreed to inform the  princess  of  their  presence. The Archbishop of Canterbury and the Lord Chamberlain stood as Princess  Victoria  entered the room, a  shawl thrown over her dressing gown, her feet in slippers, and her hair falling down her back. The Lord Chamberlain knelt on one knee and saluted her as Queen. Victoria held out her hand which the gentleman kissed. Howley told Victoria that her uncle, the late King, ‘had directed his mind to religion, and had died in a perfectly happy, quiet state of mind, and was quite prepared for his death’.  Victoria clasped her hands and asked anxiously for news of her Aunt Adelaide.

This scene was imagined some fifty years later – in the year of the Queen’s Golden Jubilee – by the English portrait painter and miniaturist Henry Tanworth Wells, in his picture ‘Victoria Regina: Queen Victoria receiving the news of her Accession’. William Howley is shown with a sense of reverent awe before the young Queen in her nightgown and kneeling, as light shines upon her, halo-like, with the news of her accession. Howley was himself less than five feet tall, a fact cleverly disguised in the picture by the fact that he kneels before his new and diminutive Sovereign, herself not much taller. When, at a meeting of the Privy Council at eleven o’clock that morning, Victoria read a speech which had been written a few days earlier by Lord Melbourne, it was said that her distinct and perfectly modulated elocution thrilled her audience.

Archbishop William Howley was part of Victoria’s world almost literally from the first (he had been present at her baptism), and remained so until 1848, when he died.  He appears in paintings, sketches, and descriptions in the Queen’s journal. The Queen would quite rightly view him as having been a member of her life from the beginning and, with his death, she felt a passing of the old world.

All her life, Victoria was a great recorder of events and I plan from time to time to share with you some encounters she had with churchmen throughout her long life as seen both through her eyes and as remembered by the clerics who met her.