From Devon to Canterbury 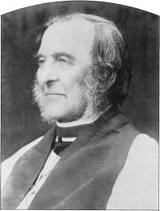 In the entire history of the Church of England there has only been one father and son who have both become Archbishop of Canterbury – and they have a strong Devon connection. The father was Frederick Temple, one of whose last acts as Archbishop was to officiate at Queen Victoria’s funeral. Frederick was Bishop of Exeter from 1869 to 1885 and was known throughout Devon for his bluntness. Once at a public lunch, a worthy lady asked ‘May I give your grace some of this cold chicken?’

‘No, you may not’ was Temple’s reply. ‘Wherever I go they give me cold chicken and the “Church’s one foundation” and I hate them both!’

Frederick’s son William was born in the Bishop’s Palace in Exeter in 1881 and went on to become a much loved and admired Archbishop of Canterbury in 1942 before dying suddenly two years later. He recalled that his father, though known as ‘granite on fire’, could not preach about the cross of Christ without tears in his eyes.

I am a fan of William Temple’s books, my favourite being his ‘Readings in St John’s Gospel’ which he wrote while he was Archbishop of York in the 1930s. While reflecting on the conversation Jesus had with the woman of Samaria, recorded in John 4 and which turned to the subject to worship, Temple wrote this: ‘Worship is the submission of all our nature to God. It is the quickening of conscience by his holiness; the nourishment of mind with his truth; the purifying of imagination by his beauty; the opening of the heart to his love; and the surrender of will to his purpose – and all this gathered up in adoration, the most selfless emotion of which are nature is capable and therefore the chief remedy for that self-centredness which is … the source of all actual sin.’

John Stott, whose biography I wrote, knew William Temple as a young man. Stott told me that William Temple first taught him that sin equals selfishness. For my part I try to reflect on Temple’s thought-provoking words when I prepare myself for worship.