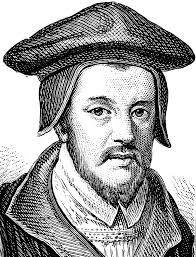 John Jewel was born in Bowden Farmhouse, just south of the village of Berrynarbor, on 24 May 1522. He attended Barnstaple Grammar School before going on to study at Merton and Corpus Christi Colleges in Oxford becoming a Fellow at Corpus Christi in 1542. His lectures at Oxford were popular occasions when many came to hear the ‘dexterity of his wit and learning’. After spending some years meeting reformers in Europe he was appointed Bishop of Salisbury by the new Queen Elizabeth in 1560 at the age of 38.

Jewel is most famous for his defence of the newly established Church of England Apologia Ecclesiae Anglicanae which was backed by the government, translated into many European languages, and read out in every church in the country. He also helped and encouraged another young Devon boy, Richard Hooker, who went on to become a distinguished theologian with a fine statue to his memory in Exeter cathedral close.

Preaching was central to Jewel’s work in the Diocese of Salisbury and a portrait of him treasured in the diocese is inscribed with the Latin words, Ve mihi si non evangelizavero – ‘Woe is unto me, if I preach not the gospel!’ (1 Corinthians 9:16). Preaching in the presence of Queen Elizabeth he called on her to ensure a well-educated ministry in the newly established Church of England and later accompanied the Queen on a visit to the University of Oxford.

Jewel conscientiously devoted himself to the spiritual well-being of his flock as well as to the good administration of his diocese. Unmarried, abstemious, without an ounce of spare flesh, he was prone to sickness.

During one of his last visits in his diocese, while riding to Lacock to preach, he was taken ill but insisted on carrying on with his appointment. ‘Surely it is better that people should lack one sermon,’ someone challenged him, ‘than lose their preacher?’

‘It becomes best a bishop to die preaching in the pulpit,’ Jewel replied.

Working incessantly on his many books and preaching, and taken up with the care of his diocese, he shortened his life by limiting himself to four hours sleep a night. He died on 23 September 1571 some months short of his fiftieth birthday. We would do well to imitate this successful Devon boy’s urgent concern to preach the gospel by word and deed – but we should be careful not to work ourselves to an early grave.