Dudley-Smith: How is it between you and Jesus Christ? 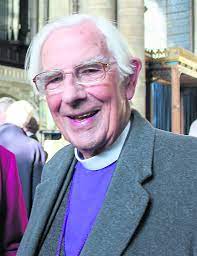 On 15th August 2021, the set Common Worship Gospel reading was Luke 1:46-55, the Magnificat. This reminded me of this story: in May 1961, a 34 year-old man living in Blackheath, London, was sent a review copy of the New English Bible New Testament. The NEB translates the opening line of the Magnificat ‘Tell out, my soul, the greatness of the Lord’. This prompted the young man, whose name was Timothy Dudley-Smith, to write a hymn which begins:

Tell out, my soul, the greatness of the Lord!
Unnumbered blessings give my spirit voice;
Tender to me the promise of His word;
In God my Saviour shall my heart rejoice.

The hymn was first published in the Anglican Hymn Book of 1965 and it would now be pretty well impossible to find a major hymn-book which has not included this magnificent hymn. Timothy Dudley-Smith, who went on to become Bishop of Thetford, is still alive at the age of 94. Over the years he has written an incredible 400 or so hymns.

On Friday 13 January 2012, Sheila and I travelled to London and made our way to St Paul’s cathedral where 2000 people from all over the world assembled for a memorial service for Chaplain to the Queen, Revd. John Stott. At half past eleven we stood as a procession of Canons, Archbishop of Canterbury Rowan Williams, Archbishop of York John Sentamu, Bishop of London Richard Chartres, and, John Stott’s friend, Timothy Dudley-Smith took their places under the cathedral dome.

Timothy had been asked to preach the sermon and had chosen as his text: ‘Jesus is Lord of lords and King of kings, and those with him are called and chosen and faithful’ (Revelation 17:14). Towards the end of his address he said, ‘As I have been pondering this sermon, a well-known voice has been always at my elbow, saying “Not about me, but about Jesus!” And I do not think John would feel I had been true to his memory if I did not now ask each of us how we ourselves stand before those words, called and chosen and faithful. So, in a phrase I learned from John, may I put to you – to each of you individually – the direct question: “How is it between you and Jesus Christ?” I have no time to elaborate on that, but as earnestly as I know how, I leave the thought with you: called? chosen? faithful? How is it this Friday morning between you and Jesus Christ?’

Since we had both written biographies of John Stott, I had a conversation with the preacher and hymn writer at a reception following the memorial service. ‘What will your next book be about?’ Timothy asked me. ‘I don’t know whether I shall ever write another book,’ I replied weakly. But now, nearly ten years later, I think that, if I do, it would be lovely to tell the story of a time of spiritual revival in Ilfracombe when the sound of voices resounds from Capstone Hill to Hillsborough singing ‘Tell out, my soul, the greatness of the Lord!’