David Suchet (Poirot) to uncover the story of Paul 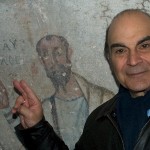 In a major new series for BBC1, actor David Suchet sets out on a personal journey around the Mediterranean to uncover the story of a man he has longed to play – the biblical Saint Paul.
Paul did more than any other individual to transform the fledgling Jesus Movement from an obscure Jewish sect into a new global religion. But what drove him to embark on his extraordinary missionary journeys around the pagan world?
In this two-part documentary David retraces Paul’s footsteps in search of the real, and highly controversial man, hidden within the pages of the New Testament. On the way he visits locations ancient and modern, interviews expert witnesses and deciphers new evidence from the latest archaeological research. A quest that sheds fascinating new light on the character of the man credited with bringing Christianity to the World and changing Western Civilisation.