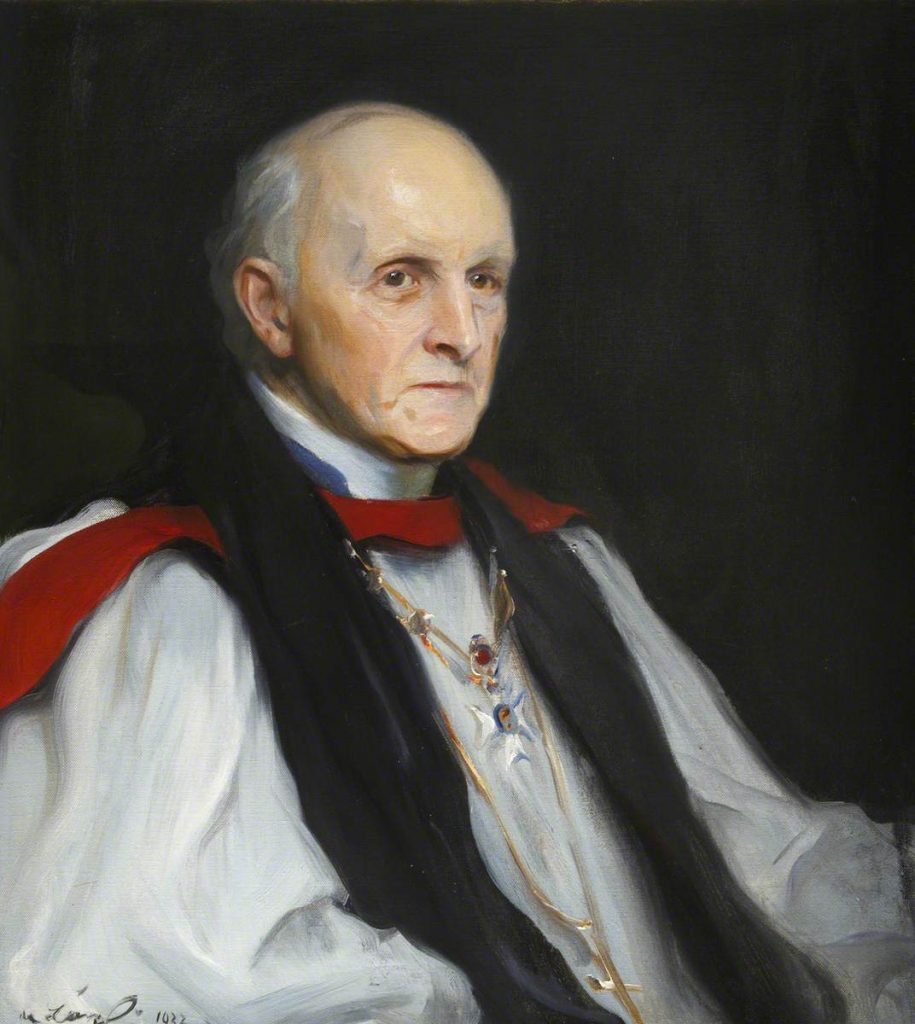 Our present Queen was confirmed by Cosmo Gordon Lang in 1942 in one of his last acts as Archbishop of Canterbury. Maybe, during confirmation classes, Lang shared with the Queen his recollections of spending time with her great great grandmother, Queen Victoria. At the age of 32 he had become Vicar of Portsea and, just across the water, Victoria, in the last years of her reign, was often in residence at Osborne House.

One day in January 1898 Lang received a letter from one of the Queen’s Ladies-in-Waiting, commanding him to preach in the chapel at Osborne House on the following Sunday. He obeyed, of course, and subsequently the invitation was repeated many times until the Queen died. Lang left very full notes of his visits to Osborne. The first invitation was to dine with the royal household on Saturday night and to preach the next morning. Lang arrived at Osborne with knee breeches and silk stockings. He had to borrow from his curates — a tall hat from one, an umbrella from another, and a robes-bag from a third.

On the Sunday morning, Lang recorded in his journal, ‘punctually at eleven the door opens: “The Queen: all rise.”  I was conscious of a little black figure supported by an Indian servant and followed by children. The little figure sat down at once, opposite the priest, and scanned the text placed on her table. Princess Beatrice and her children surrounding her.’

The Service then started. Liturgically, Lang commented, it was ‘a somewhat mangled affair,’ but gained ‘dignity through its circumstances.’ He preached on the text: ‘Lord, to whom shall we go? Thou hast the words of eternal life”.’ He had written out his sermon, but did not use the script. Later he found that the Queen generally sent afterwards to ask for the manuscript, and when he spoke from notes, he had to sit down and try to reconstruct what he had actually preached.

Just before lunch he received the Queen’s command to dine with her that evening and to stay on till Monday. ‘I can never forget the impression made when, before dinner, the door opened, the page announced in a loud voice, “The Queen,” and she entered, so small in stature, yet clothed with such unconscious but unmistakable dignity. I have been present at many great State occasions during the last half century, but I do not think that I have ever been so immediately and deeply impressed as by that simple entry of “The Queen”.’

After dinner the Queen sent for Lang and talked to him for twenty minutes or half an hour. ‘It was difficult to realise,’ he wrote, ‘that the little figure over which one bent, with the soft kind voice and simple manner, was the Queen and Empress whom a year ago one had watched passing through crowded and jubilant London, the centre of the greatest pageant in our history, the embodied spirit of the great Empire. Certainly she has the royal art of putting people at their ease. The grace and simplicity of her manner, the native kindliness of her smile made nervousness vanish. With one exception all the portraits and photographs of her give a very one-sided picture of the expression of her face. No doubt in repose and on great occasions it was severe and masterful but in conversation, unless she was bored or annoyed, it was lit up by a very charming smile. The one exception to which I have referred was a photograph taken of the scene at the steps of St, Paul’s Cathedral on the day of the Diamond Jubilee. When the huge crowd surrounding the steps began to roar ‘‘God Save the Queen !” she turned towards it with a radiant smile, like a sudden shaft of sunlight. Happily it was just at that moment that the photograph was taken.

‘Moreover, when she was amused — and she had a very real if very simple sense of humour and fully relished any good story or any amusing turn of phrase — her voice would break into a soft, gentle, and very delightful laugh, a sort of gargle of pleasure. Well, at that first conversation with her she asked many questions about my parish and the way in which it was managed. And here a fragment of the conversation may be worth recording… I had been speaking of my fifteen or sixteen curates who lived with me.

Queen: “Don’t you think you ought to marry. A wife would be so great a help.”

Myself: “I fear I cannot afford one: my curates cost too much.”

Queen: “But surely a wife would be worth more than one or two curates.”

Myself: “No doubt, ma’am, but there is this difference: if a curate proves to be unsatisfactory I can get rid of him, A wife is a fixture.”

Queen (laughing): “I can see you have a very poor idea of matrimony.”’

I will tell you more, in a future blog, about Cosmo Lang’s conversations with the Queen and how she remembered them in her own journal.