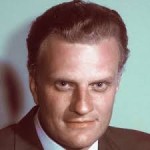 ould love to have been a fly on the wall when, in 1955, Rev John Stott, Rector of All Souls Church, next to the BBC in Langham Place, London, arranged a meeting between Billy Graham and C.S. Lewis, then a Fellow of Magdalene College, Cambridge. The three men met in Lewis’s rooms at Magdalene and spent an hour or so together.

‘I was afraid I would be intimidated by Lewis,’ Billy Graham later admitted, ‘but I was relieved to find that he immediately put me at ease. I found him to be not only intelligent and witty but gentle and gracious. He seemed genuinely interested in our meetings.’

‘You know,’ said Lewis to Billy as they parted, ‘you have many critics, but I have never met one of your critics who knows you personally.’

Just over a year later, when John Stott was conducting university missions in America, he was invited to spend Christmas with the Graham family in their home in North Carolina. Billy met John and drove him along the steep and winding road to their home in Montreat, a village on the side of a mountain. Billy, and his wife Ruth, lived in a log-cabin style house, surrounded by woods, with a superb view across the mountains beyond.

John Stott was the only guest, sharing the home with the Graham family and their dogs. A big Christmas tree lit up the sitting room, with presents piled underneath. Billy Graham insisted that the adults should hang up stockings as well as the children. On Christmas Eve they nailed seven stockings, each clearly labelled, in a row along the beam over the fireplace. Billy took Christmas gifts around to people living in the neighbourhood, and each evening during John Stott’s stay, he led the family in a Bible reading and prayers. While John was there, Cliff Barrows and Grady Wilson came to record the Hour of Decision radio programme. Then they played golf with Billy while John Stott, all his life a committed bird-watcher, admired yellow-bellied sap-suckers on the golf course.

Writing later about Luke 2:20 ‘The shepherds returned, glorifying and praising God for all the things they had heard and seen’ John Stott noted that the shepherds’ experience had resulted in worship as well as witness. Observing that the discovery of Jesus is still a transforming experience, because it adds a new dimension to our old lifestyle, Stott recalled Billy Graham’s words that it ‘puts a new light in our eye and a new spring in our step.’