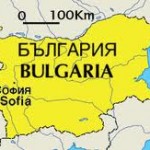 I am looking forward to paying another visit to the orphanage in Burzitsa, Bulgaria, next summer.  I was interested to read in Inspire Magazine that Bulgarians are showing a greater interest in the Bible thanks to a Christian TV programme, according to research by Netherlands based media group 3xM.

The programme Christianity from Studio 865 in Bulgaria attracts more viewers than other programmes on the same channel, with 60% of people interviewed saying that Christianity is better than most of the TV programmes they watch.

As a result of the programme, 31% have become more interested in reading the Bible and 12% say they plan to attend church, or go to church more often.

The programme addresses current social issues such as Christianity and Islam, or aggression in schools through studio interviews, commentaries and news broadcasts.

3xM has been helping Christians to produce and broadcast TV programmes in countries in which few Christians live.  It is mainly active in West Africa, Asia, Turkey and Bulgaria.