Boniface and the story of the Christmas tree

St Boniface, who was born in or near Crediton around the year 675, went on to play a central role in the conversion to Christianity of what we now call Germany. But he is also important as we think about the origins of the Christmas tree.  You will know the story of how Queen Victoria’s consort Albert brought the tradition of Christmas trees to England from Germany – but how did the tradition begin there?

According to one version of events, St Boniface was the creator of the very first Christmas tree.

On 15 May, 719, Wynfrith (his name at birth) was sent to Germany by Pope Gregory II and given the name Boniface. His mission was to convert the unbelievers in that part of Europe to Christianity.

He worked tirelessly in the country destroying idols and pagan temples across Germany and building churches in their place. In 732 he was made an Archbishop and founded or restored the diocese of Bavaria.

It was on this trip, around the time of Winter Solstice, that he was said to have come across a group of pagans worshipping an old oak tree. Horrified by what he saw as blasphemy, the all-action Boniface grabbed the nearest axe and hacked down the tree. As he did this he called the pagans to see the power of his God over theirs.

The feelings of the locals were understandably mixed, but Boniface’s actions seem mainly to have been taken in good spirit, with some of the tales saying he converted the pagans on the spot.

This is where the story divides. Some say that Boniface planted a fir tree there, but the most common idea is that a fir tree grew spontaneously in the oak’s place.

The fir was seen as an image of God and many believed its evergreen character symbolised the everlasting love of the Creator.

According to the story, the next year all the pagans in the area had been converted to Christianity and hung decorations from the tree to celebrate what they now called Christmas rather than Winter Solstice. The story spread and soon Christmas trees became the norm in the newly converted Bavaria, and then spread out to become the tinsel strewn, electric lit, bauble hung festival we know today.

St Boniface was the greatest of the eighth century missionaries to Europe and played a significant role in the history of medieval Europe. His reforming zeal also had an impact on the Church of England since it was partly at his insistence that Archbishop Cuthbert of Canterbury and King Ethelbald of Mercia called a reforming council in 747.

In 753, Boniface handed over the Archbishopric of Mainz to his disciple Lull with the agreement of King Pippin and returned to missionary work in Frisia.

On June 5 754 Boniface was murdered by brigands in Dokkum in Frisia. You can see the Book of the Gospels with which he tried to protect himself, and the dagger which killed him, if you visit Fulda Abbey (in Germany) which he had founded. So we should honour Boniface’s courage, missionary and reforming zeal – but perhaps we should also remember his role in the story of the Christmas tree. 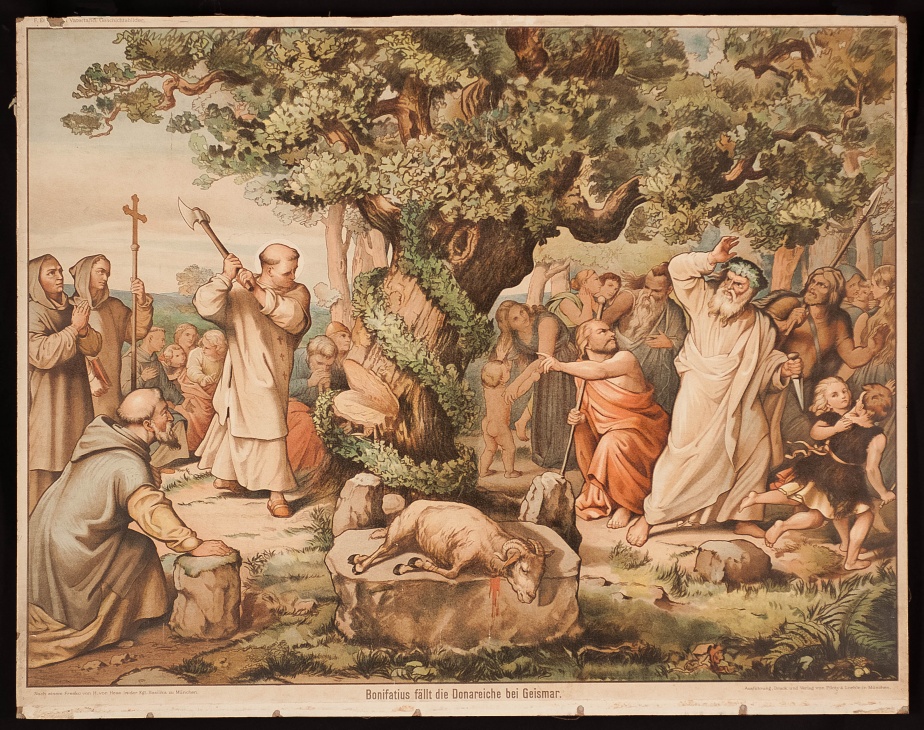